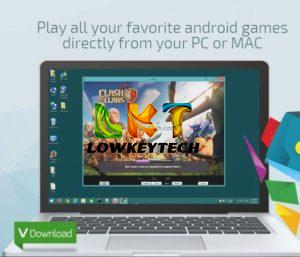 Running Android Apps on PC used to be very tedious and also complicated, because it involves several steps and procedures installing Android apps and actually running the apps might encounter difficulties and problems. Life just got easier with “ANDY” Android Emulator.ANDY allows you to use all the apps from your android mobile device on your PC and allows you move from mobile to desktop smoothly. The application also lets you use your android phone or tablet simultaneously with your computer, with your mobile android device which has the ANDY companion app controlling the emulator. No need to take a tedious process in installing an android apps on PC again as you can now run any android apps with ease using Andy.

Andy breaks down the barrier between desktop and mobile computing, while keeping a user up to date with the latest Android OS feature upgrades. It also provides users with unlimited storage capacity, PC and Mac compatibility, and the freedom to play the most popular mobile games on a desktop, Yes you can now run Android on windows. With phone as a joystick, you will never have to sacrifice the multi-touch or gyro elements of gaming, and thanks to seamless connection between desktop and mobile, you can receive a SnapChat phone picture on the street and see it on your desktop at home or even a whatsapp message.

ANDY is an independent Android OS app for desktop computers that brings the full Android experience from your phone to your PC or MacBook. Andy currently runs on the Android 4.2 Jelly Bean and I personally recommend it to every PC users who own an android phone.

Comparison Chart With Other Emulators

You will be asked to sign in with your google account and 1clicksync to sync up Andy and whichever Android device you would like paired with your computer.

With Andy, I can practically install all my favorite android games and play them on my Pc with ease. Frankly speaking, Andy is far better than Blue stack emulator. You don’t experience issues when running android apps on Pc with Andy, unlike using Blue stack which sometimes lags and freezes the app.

Finally, Andy is a decent substitute for Android users who are eager to put the mobile OS on their PCs. It is a must have app for every geek.

4 thoughts on “How To Run All Android Apps On PC”