App Rush – How long can you Survive the internet without getting a Virus?

App Rush is an innovative virus game created by a Nigerian Edu Shola a graduate of Political Science from the Lagos State University, LASU. He invented an application called App Rush which was developed through the process of downloading an application.
App Rush is an exciting survival game that is based on how people download applications while surfing the internet and facing risks of downloading viruses. The game Developed by Deluxe Creation Studios is an easy to play game available on both Andriod and IOS (iPhones and iPad with iOS 5.1.1 or later).
App Rush is the first ever game about apps, viruses and antivirus. Its a fun and simple game, you earn points by click on moving icons of apps at the same time avoiding to click on Apps with virus. The Game so far have being receiving high ratings on Google Play Store and Apple Game Center. App Rush is free to play.
App Rush is also educational as it contains hidden fact about viruses. Also its helps improve the hand-eye coordination which helps improve cognitive and social skills, Improves reaction times, Increases productivity, Better child development etc 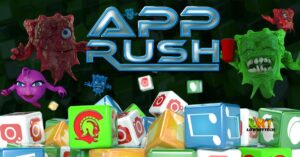 ● Click Apps on screen to gain scores
● Unleash unique Anti-virus power ups to help you clear viruses off the screen
● Advance through levels to meet new characters
● Complete tasks in levels and unlock more levels
● New Updates every 4 weeks
● Easy and fun to play, but challenging to master
● Worldwide Leaderboards to watch your friends and compete with them
● Post Scores to your favorite social networks like Facebook and twitter

How does it work?

The score of the apps are based on availability across devices that is why the picture applications have the highest score in the game. The music apps have the lowest score because almost all devices play music hence they have lower value compared to other apps. How long can you click apps without clicking a virus, that is what the game is basically about