Microsoft has announced that it will acquire LinkedIn in a transaction valued at $26.2 billion, Once the deal is completed which is expected to be sometime in 2016, LinkedIn will continue as it currently is in terms of “brand, culture and independence the announcement noted.

LinkedIn CEO Jeff Weiner will remain at the helm of the new Microsoft subsidiary and will report directly to Microsoft CEO Satya Nadella.

LinkedIn Ceo said “we are excited to share that LinkedIn has entered into an agreement to be acquired by Microsoft. We are joining forces with Microsoft to realize a common mission to empower people and organizations. LinkedIn’s vision to create economic opportunity for every member of the global workforce is not changing and our members still come first.

Our companies are the world’s leading professional cloud and network. This deal will allow us to keep growing, investing in and innovating on LinkedIn to drive value for our members and our customers. Our members will continue to develop their skills, find a job and be great at that job, using our platform. We will continue to help our customers hire top talent, market their brand, and sell to their customers”

Founded out of California in 2002, LinkedIn today claims north of 400 million members globally and, with 105 million unique monthly visitors, has emerged as the de facto social network for professionals. The company went public on the New York Stock Exchange (NYSE) in 2011 and claimed around $3 billion in revenue last year. But there is only so much room for growth in LinkedIn’s world, which is why selling to a major technology company may make sense monetizing social networks isn’t an easy job.

While LinkedIn has built a good, solid business from connecting professionals, many have complained that the service has become cluttered and unusable and has even lost its way. Being acquired by Microsoft may give LinkedIn the breathing space to regain its footing. 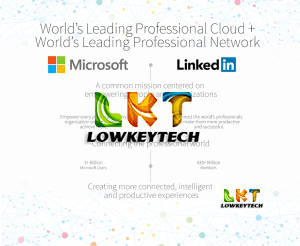 For Microsoft, the deal represents its biggest acquisition by quite some distance, its next-most-valuable acquisition came back in 2011 when it snapped up Skype for $8.5 billion. Microsoft also paid not much less than that for Nokia’s mobile phone business. So why would it pay more than three times its previous biggest acquisition amount for LinkedIn? According to Nadella, the company wants to create synergy between LinkedIn, Microsoft Office 365, and Microsoft Dynamics, its enterprise resource planning (ERP) and customer relationship management (CRM) software suite.

“The LinkedIn team has grown a fantastic business centered on connecting the world’s professionals,” said Nadella, in a press release. “Together we can accelerate the growth of LinkedIn, as well as Microsoft Office 365 and Dynamics as we seek to empower every person and organization on the planet.”

Though the board of directors at both companies have “unanimously approved” the all-cash deal, shareholders haven’t. There’s nothing to suggest that the acquisition will be voted down after all, the deal doesn’t seem too bad for LinkedIn shareholders, but if they did reject it, LinkedIn would have to pay a termination fee of $725 million.

Whether this deal turns out to be a catastrophic failure or an astronomical success, it represents one of the biggest technology acquisitions in recent times. In fact, in terms of tech-only acquisitions, it’s second only to Dell’s $67 billion purchase of EMC last year.

How Your Brand Can Play Safe On Social Networks

5 Points To Note Before Launching An Online Shopping Store

How Your Brand Can Play Safe On Social Networks

5 Points To Note Before Launching An Online Shopping Store