Netflix adds a new useful feature to its app called “Partial Download” for all Android users. This new feature helps you to stream content that isn’t completely downloaded. On Monday, Netflix has announced this new feature where the users can watch movies, TV shows, series, and anything that has not finished downloading.

Currently, the most popular streaming service allows the users to first download the full content on the mobile or tablet and then view it offline. But, now the users don’t need to wait for the download process to complete.

Netflix Now Lets you Watch Half Downloaded Shows on Android 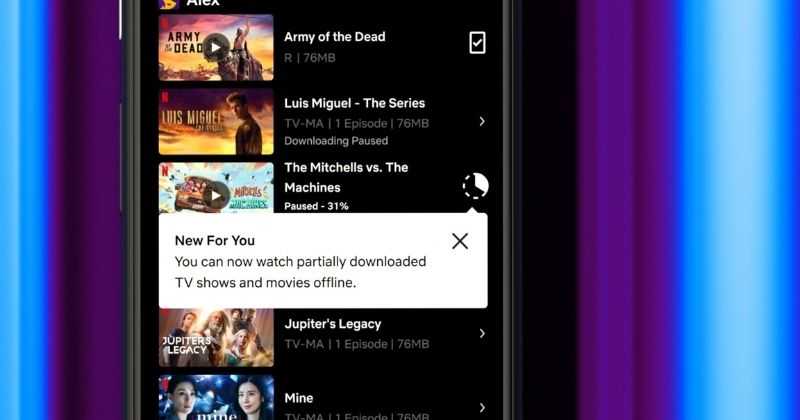 Back in the year 2016, Netflix announced the download feature to stream content offline or in the areas where you don’t have internet or have less internet.

However, with this latest feature partial downloads, Netflix takes its offline download feature up as the users can watch the incomplete download content also. The users can finish the downloading process once they regain the Internet.

“We’ve improved the Netflix download experience so you can now start watching The Mitchells vs The Machines or the next episode of Luis Miguel – The Series even if it hasn’t completed downloading. Once you’ve regained a strong enough connection, you can choose to finish the download and keep watching — avoiding those surprise notices that you’ve gone over your data limits”.

This feature is now available for Android phones and tablets. In the coming months, the company will start testing on iOS devices. Earlier, in February, Netflix brought, “Download For You” feature. It understands your taste in movies and shows and automatically downloads the content that you might like. The Netflix Smart Downloads automatically deletes the episodes that you have watched and starts downloading the next episode of the series.

This new feature will be useful when you have limited mobile data. For example, while downloading if you lost an internet connection, or run out of data, at least you can watch the half content that is downloaded and once you get a connection, you can start downloading from the same.