OnePlus TV 40Y1 to Launch in India on 24 May, Specifications Revealed

OnePlus is launching its smart tv in India this week. The new Y-series Smart TV OnePlus TV 40Y1 will join the older models on May 24. The company has announced about the launch of TV by posting a tweet. 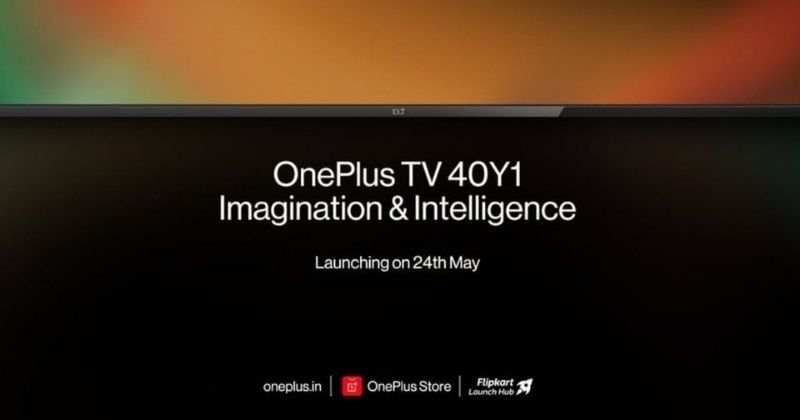 Before the launch, Flipkart and the official website of OnePlus India have revealed some features of the OnePlus TV 40Y1. Let us see some key features of the upcoming smart TV by OnePlus.

The expected price of the OnePlus Y series TV is around Rs. 20,000. As the price of this model will be slightly cheaper than the 43-inch model which costs 26,999 in India.

Already a dedicated page for TV is live on the official OnePlus website. The OnePlus TV 40Y1 will have a 40-inch screen that supports full HD with 1920 x 1080 pixels resolution. It will have a bezel-less design. For improved color rendering, the screen has 93% coverage of DCI-P3 color gamut and Gamma Engine picture.

The upcoming OnePlus TV 40Y1 will have support for Alexa and Google Assistant, and has an inbuilt Chromecast, and will also allow to access Google Play Store. Most of the apps like Netflix, Prime Video, Hotstar, YouTube will come preloaded. There is automatic reminders for reminding about the latest movies and TV shows.

On talking about the connectivity options, there is Wi-Fi 802.11 b/g/n and Bluetooth v5. It has two 20W speakers with Dolby Audio. There will be one Ethernet port, RF connection input, One AV In, two HDMI ports, one digital audio output, and two USB ports.

The smart TV will have 1GB RAM and 8GB internal storage with a 64-bit processor. OnePlus TV will run on Android TV 9-based on OxygenOSPlay.

Once the TV launched in India, you can purchase it from the official OnePlus website, and an e-commerce site Flipkart.