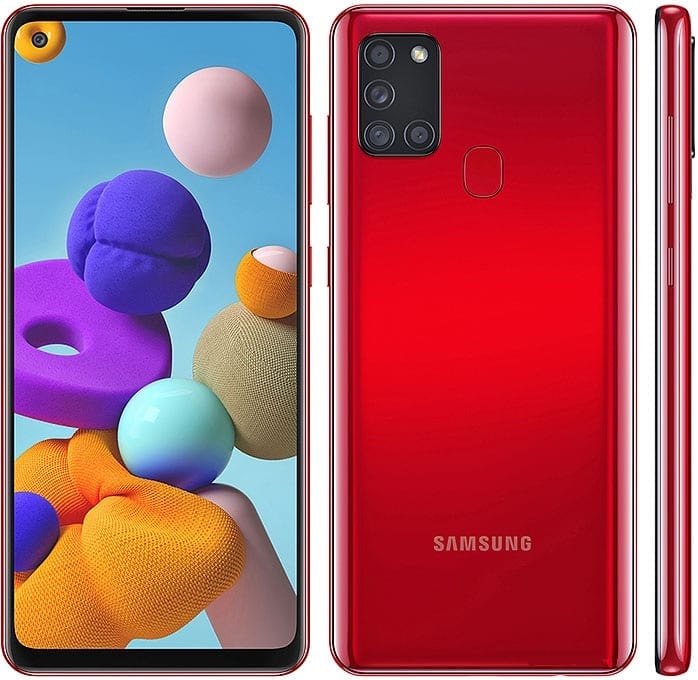 The rear panel of this smartphone is also home to a capacitive fingerprint sensor and the Samsung branding, which indicates its a Samsung smartphone.

Upfront we have got the same setup from the less premium Samsung Galaxy A21. This setup comprises of a 6.5-inch Super AMOLED display, which houses a punch-hole camera. This display has a screen resolution of 720 x 1600 and a screen density of 270 PPI.

The Camera department was stepped up a notch, with the only upgrade being the primary camera on the rear. The Samsung Galaxy A21s makes do with a 48MP primary rear camera, as opposed to the 16MP primary camera we saw on the less premium Galaxy A21.

Selfies are manned by a 13MP camera, which is also capable of shooting 1080p videos. You also get HDR for photos.

The Samsung Galaxy A21s packs smartphone hardware that sort of falls in the lower end mid-range category. You have a package designed for tasks that aren’t power intensive.

Packed in this smartphone is an Octa-core Exynos 850 processor. You get 3GB, 4GB, and 6GB options for RAM, option for 32GB or 64GB of internal storage, and a non-removable 5000mAh Li-Po battery.

On the software side, you have got One UI 2.0 interface running on the Android 10 operating system.

Internet connectivity on the Samsung Galaxy A21s is capped at 4G LTE, 5G support is absent here, which means downloads, streaming and uploads are limited to 4G speeds.

Here are a few specs of the Samsung Galaxy A21s: