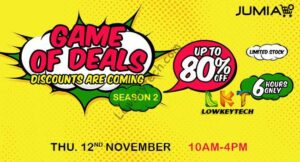 There is nothing that beats the captivation and Déjà vu of lightening striking twice in one place with a volt of 80% discount. Jumia represents the 2nd edition of the Jumia Game of Deals climaxing at a jaw-dropping 80% discount across all categories from 10am to 4pm on Tuesday, 12th of November, 2015.

The 1st edition of the Game of Deals was a battle; Jumia was under siege by an army of shoppers making a 15% increase at the end of the 6-hour avalanche. They looted with sensational items like the iPhone 6, PS4, Blackberry series, Samsung 6 Edge and more.

Jumia will be seeking its revenge in a return battle using it its 80% discount and other blockbuster deals in its arsenal as weapon of warfare. The Samsung Galaxy phones, Haier Thermocool air conditioners, Omega Gas cookers, Philip air fryers, trending Techno and Innjoo phones are the knights that would lead Jumia to war at 80% discount.

Be ready! It is going to be clash of titans, strength of the Spartans, battle formations like the Romans and a fight to the finish. It is now or never to forge your weapons and take advantage of this mouthwatering discounts at the battle front.

Wake up! Be alert! Click here to subscribe to our newsletters or call 07006000000 so that you are not taken unaware because, this Déjà vu is real.

InnJoo is up to something! It is without Limits

InnJoo is up to something! It is without Limits