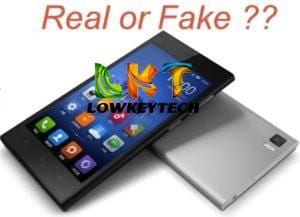 Android phones are one of the most popular brand of smartphones in the world. Smartphones manufacturers recently came up with amazing low budget Android smartphones that floods the android market, whereby allowing access to various types of fake androids smartphones to mix with the original brands made by the manufacturers.

Android is an open-source mobile Os, the leading manufacturer like Samsung and others have now moved to android operating system platform. The China local manufacturers are taking advantage of open-source android to clone a device, since the mobile market is running very fast, in every month a new device is getting launched.

Most of the cloned androids phones available today are built so cheaply that their materials and their craftsmanship reflect the amount of money invested on them when compared to the original version.

Some suppliers in China have taken to counterfeiting the Android smartphones and passing them off as the real thing to ignorant buyers, few phone dealers shops have even picked up the fakes and are redistributing them as the real stuff.

Those china android smartphones are so identical with the real device that you find it so difficult to spot the difference and making it so hard to identify whether they are fake or not. Practically all original brands of the Android device  have been cloned by these China companies.

How To Identify Fake Android Phones

Below are 100% tested and trusted ways and techniques to aid you to actually spot the difference between the fake android device and the real device.

What are the things to look out for when trying to spot a fake Android phone?

Below are little things to notice and take note of:

Some fake Android phones are so convincing that one can hardly see any physical differences from the real product. However, when put to performance tests, they fail and the devices will be exploited. Try these tests below:

The Samsung codes would be used for this tutorial

Samsung Galaxy phones have fixed codes that can be entered to test functions or view information about the device. You just simply input the codes in your dialer app and your phone should respond to it. If the phone does not show any response, then the Galaxy device you are holding is an imit. These are the most common Samsung codes:

13 thoughts on “How To Identify Fake Android phones {China Phones}”