The days when your slow PC does not respond during gameplay are over, speed up and optimize your computer for the smoother and more stable gaming experience, and restore your computer to the previous state when you stop the game with just one click.

The Smart Game Booster, as a tool, helps you get real-time information about processor temperature, GPU, motherboard, and fan speed and your FPS information when you are in a game. It is useful for optimizing system performance in computer games. With it, you will optimize your computer, speeding up the performance of video games. You will also get better fluidity and more frames per second.

Smart Game Booster optimizes the system by closing unnecessary applications and services and also cleans up RAM and associated components in the auto-run section. Also, the program provides a convenient way to start games and view the operating temperature of the processor, motherboard, graphics card, and fan speed installed on the computer in real-time. You can also activate the number of frames per second displayed during playback.

If you are a game lover, you must have encountered the situation that your PC CPU and GPU are overheating. Generally, each player should know the importance of the radiator and cooling systems for his equipment. Whether it’s a desktop or laptop computer, the heating issue is a significant concern for game players. The laptops and desktops are often locked or shut down due to high temperatures. Not only can processors overheat from resource-poor games, but fans and GPUs can also overheat. 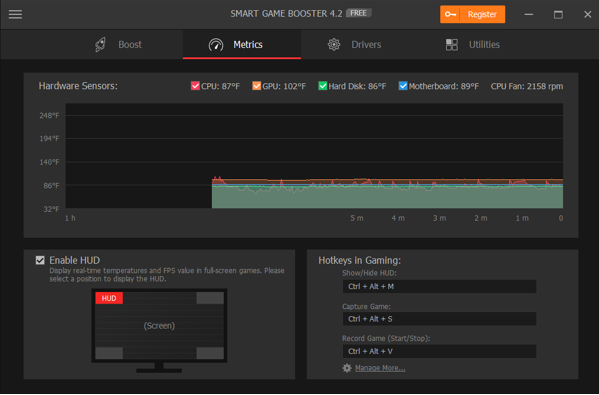 Don’t worry. The Smart Game Booster solves this problem, enabling you to monitor the temperature of the system so you can pause or set the cooling mechanism. Previously, your system shut down because of overheating, but after installing the software, it will warn you of overheating in order to take corrective action. It is a great CPU temp monitor that never lets you down.

The processor temperature monitor monitors the CPU and GPU and reports the temperature in real-time. It is interesting to note that this software displays the temperatures inside the games. It also provides valuable details on fan speed and motherboard temperature. Be careful when the limit temperature is reached. This allows us to suspend the game and save the data for another session.

The game was played with a lower FPS on our system. However, when using the FPS Booster, it increased the FPS frequency of the system, thereby improving the quality and performance of the video. While our system was limited to playing at 30 fps, the time went up to 60 fps. The result was a much smoother game. It was no longer embarrassing to play.

This software allows us to increase the FPS of the system with one click. No hardware upgrades are required, including the graphics card. After installation, there is a button that, when pressed, allows you to use more system memory by releasing it. It can also stop unwanted processes.

Overclocking improves the running speed of a particular component or hardware. In computing, overclocking is the practice of improving the computer’s clock speed, making it more than to exceed the limits designed by the manufacturer and to enhance the performance of the processor or GPU. Generally speaking, we can improve PC performance by overclocking CPU, GPUs, and memory card.

Sometimes, in order to improve the speed and performance of the game, the player needs to overcome the CPU/GPU to make the difference even if they already have high-end computers. But will overclocking have serious consequences, such as overheating processors, GPU, and PC fans? Smart Game Booster offers the solutions to control and monitor real-time temperatures of the CPU and GPU, both in games and in other operations.

Smart Game Booster also helps users optimize Windows. It can work as a driver update program that can automatically detect and update obsolete drivers. From a game point of view, outdated audio drivers and graphics are the primary concerns. Once the drivers are updated, the gaming experience becomes much smoother and better.

Smart Game Booster allows you to launch games inside the program without finding them one by one from different distributors. With it, you will enjoy a perfect game performance.