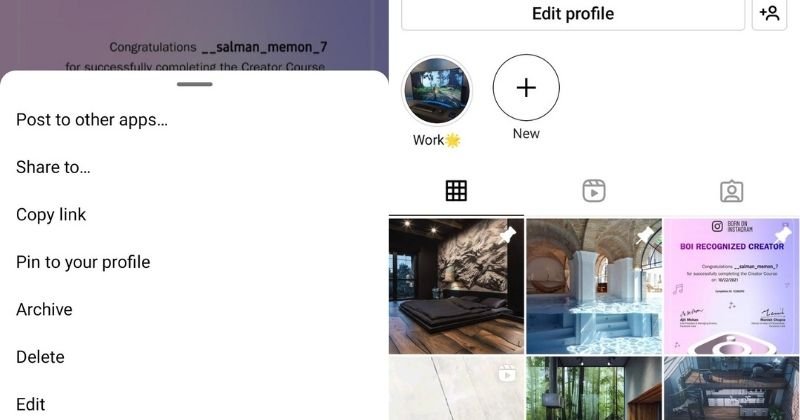 Instagram is testing a new feature that will let users pin posts to their profiles. Currently, we can pin(Highlight) Stories to the profile.

Meta confirmed the feature; Instagram will soon provide an option to pin users’ favorite posts on top of the profile grid.

However, a user can maximum pin three posts at the top of the profile grid. At present, the feature is in the testing phase and is available for limited users.

Instagram To Allow You To Pin Three Posts On your Profile

A Twitter user Salman Memon has shared a glimpse of the feature. In the post, we can see the picture has multiple options, where it has the “Pin to your Profile” option. The other photo shows the three pinned posts at the top of the grid.

A similar feature is available on Twitter to pin tweets and on Tiktok to pin videos. The feature on Instagram has been in work for months now.

According to TechCrunch, a spokesperson from Meta said, “We’re testing a new feature that lets people feature posts on their profile.”

Though you can highlight a post in the Story and then pin the story to your profile. This new feature will make the process easier and more straightforward.

A reverse engineer Alessandro Paluzzi has earlier shared a glimpse of the feature in January. It was in a testing phase, and now within a month, there’s an announcement of the limit of pinning three posts.

Instagram is not only testing the pin posts feature. The social media giant is also the ‘Recent’ tab option in the hashtags section. The content is now seen under the “top” and “reels” tab.