WhatsApp, the most used mobile messenger in the world across all mobile and desktop plaforms with over a billion active users has just recently released some amazing features for their mobile messaging platform. The update brings features that will bring the photos and videos you share with your contacts alive, much like what you have on Snapchat and Instagram app.

The company just announced new enhancements for its camera feature, including the ability to write or draw on photos and videos. You can also add an emoji for those times your photos need a little extra spice, like a cartoon taco or a smiling turd.

Prior to this update, WhatsApp’s image editing tools allowed you to crop and rotate photos. There were no editing options for videos whatsoever.  WhatsApp said it has also added some enhancements to the usability of its general camera feature.

The camera will now support front-facing flash, which basically means your screen will brighten before it takes the shot. This can help you perfect your selfies in low-light situations. Videos are also getting a zoom feature, the quality of which will likely vary depending on how good your phone’s camera is. The company added the ability to double-tap to switch between the front- and rear-facing cameras as well.

The new features are rolling out now to Android users, with iOS devices scheduled to receive the enhancements in the coming weeks. 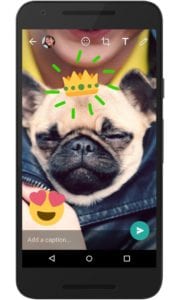 As you can see above, the editing tools look very familiar indeed. Once you snap a photo or a video, you can add emojis, draw on it, or add a text – exactly like Snapchat. When you click on the crayon icon on top to draw, you even get a vertical line of colors that bears a stark resemblance to the one found on Snapchat. To add to the confusion, both apps happen to use the open source Twemoji, so even the emojis you add are going to look identical.

WhatsApp points out that you will also be able to enable a front-facing “flash,” which basically whitens the screen temporarily to brighten up a low-light selfie.

Funny Reasons Nigerians Will Not Buy The New iPhone 7

Funny Reasons Nigerians Will Not Buy The New iPhone 7