Android phones are known for long-lasting battery capacity irrespective of how many processes you are running at the same time, the battery life shouldn’t be an issue. But it could be really confusing when you discover your android phone not charging when connected to your charger only for your battery percentage to remain at the same level for hours or in fact drop steadily.

The problem occurs in various ways, either your phone won’t charge when it is plugged in, or it only charges very slowly (sometimes barely faster than it is discharging). It’s a very common complaint, and I recently encountered this issue with my blackberry 9790.

See How To Fix Battery Drainage And Overheating On Blackberry

Am very certain you must have thought of “Why is my Android phone not charging or discharging despite being connected to a power source?”

Lets see the obvious reasons below: 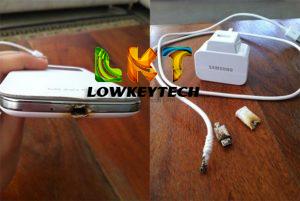 Some of you may have suffered from a phone that won’t charge properly and probably rushed out to buy a new charger to fix it, well, you are wrong. What if the issue isn’t the charger? and the actual issue is your phone battery.

Below are 100% tested and trusted ways based on my experience and am very certain it would work for you. Lets Get Started.

When you notice your android phone is not charging even though it’s plugged to power source, first action is to:

NOTE: You don’t just rush to buy anything without being 100% certain you need to, so you don’t waste your money and time.

How To Care for Android Battery life And prevent Future Occurrence

I hope after reading the above article, you would treat your battery with care and wait and find out the actual reason before jumping to buy accessories to get it fixed. Kindly drop all your comments below.

Is Your Android Phone Slow, Overheating and Loosing Battery Quickly?

If your Android phone is lagging, losing battery life too quickly, or is overheating often, then you should be worried because it might have been hijacked by a cryptocurrency miner. These symptoms may mean you’ve been the unfortunate victim of a cryptojacker.

These are the guys and gals who are figuring out complex problems to earn a new Bitcoin, or one of several other virtual currencies.

These mathematical problems, used to verify cryptocurrency transactions, require serious processing power, more than what is available from a single smartphone.

So the latest scam involves cryptocurrency miners taking control of multiple Android smartphones and linking their processing power. This is accomplished by having ignorant smartphone users install an app that has malicious software inside.

According to a new report from ESET, Bug Swasher, a game loaded from the Google Play Store between 1 million and 5 million times, was mining cryptocurrency without the knowledge of those who installed the game on their phones.

Forget the fact that Google announced earlier in July banning Cryptocurrency mining apps, even Google doesn’t know which app has been crytop hijacked. This is why extra security measure is expected from Google to protect users.

What to do to Prevent Crypto Hijacking Your Android Phone