Google is ready to roll out its latest Android OS. This time Google has revealed Android 12 Beta 3 with new features. This version is only available on Pixel devices for now. So we have managed to get some images of the Beta 3 update.

In previous releases, we have seen Android 12 designs. We have seen 6 versions of Android 12, including two public beta and three developer versions. Now in this beta version, major changes are Better auto-rotation, Game Modes, Scrolling Screenshots, and On-Device search. 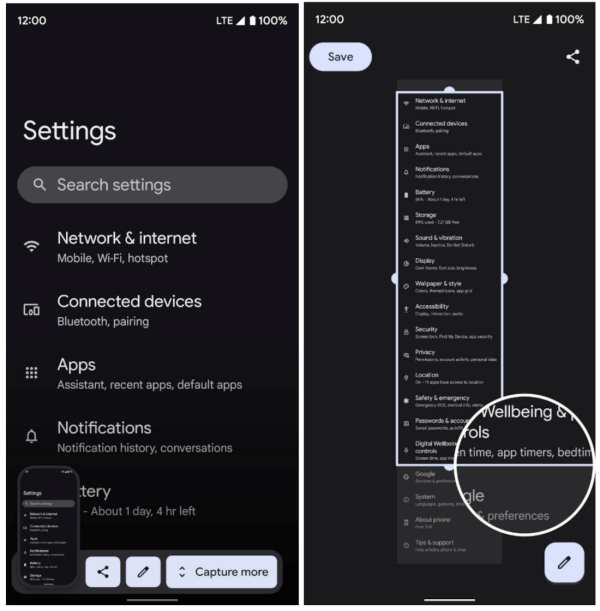 Here are details on the new changes coming with Android 12 Beta 3.

Google brings new platform support for AppSearch; it is an on-device search engine. With AppSearch, apps can index structured data also search over it with the in-built full-text search capabilities. One can also use the features like multi-language support, relevancy ranking highly efficient indexing and retrieval. AppSearch will be available in two flavors.

Android 12 will use the gyro-sensors of the device with facial recognition to control when the device should be rotated. With this, there will be fewer unnecessary rotations when you want the device in portrait mode.

Google will be adding Game Modes in Android 12 that will allow you to choose profiles for playing games. The profiles can be battery-saving when you do not have a charger. These APIs will be added to the dashboard of the game and will be available as an overlay on top of the games.

With this feature, users will be able to capture screenshots of any scrollable content. This will be helpful for longer screens and chat windows. Scrolling screenshots feature was available in OEM skins like Xiaomi’s MIUI and OnePlus’s OxygenOS. However, now it will support natively for the first time.

A new privacy indication APIs in WindowInsets will be added that shows whenever the app is using the device camera or microphone. These APIs will allow the apps to reposition the indicator with immersive mode so the user will be able to see it.