Glo recently upgraded the cost of the Glo blackberry plan of N1,000 for 3gb to N1,400 for the same 3gb data allocation. This change got the attention of all Glo subscribers using the glo comonth plan on their Android devices with the help of changing the imei number to that of a blackberry.

An LKT reader informed me about the increment of the cost of the glo bis plan and was actually pissed with glo for adding extra cost to the glo comonth bis plan.

My theory about this unwarranted addition to the glo comonth bis plan is stated around the fact Glo noticed a massive increase of its subscribers opting in for the glo comonth bis plan, which they also know about the ability of Android devices making use of the blackberry plan via change of imei number, so they decided to make more money out of it by increasing the cost whereby attracting more revenues to their pocket.

Well, a loyal glo subscriber might not be disturbed with the glo bis plan increment, due to the fact they still get 3GB data allocation for just an extra N400. But for the average Nigerians, this unwarranted increment would deeply affect them.

The sad part of this was that Glo never informed his subscribers about the additional cost. You wont even have an idea until you want to top up your plan or subscribe again that’s when you get “insufficient credit to make this transaction”

Below is a snapshot of their new blackberry plans prices: 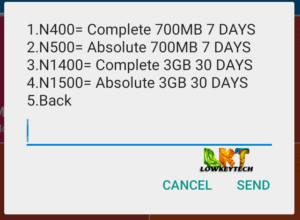 You can Dial:*777# to view all Glo updated data plans.

I simply recommend closing your eyes and paying the extra N400 just to still enjoy the 3GB of data, This plan is actually the most affordable of all blackberry plans across all mobile network in Nigeria and that also works on Android devices.

Why Southcrest College Is The Best Sixth From College In Lekki, Lagos

Why Southcrest College Is The Best Sixth From College In Lekki, Lagos