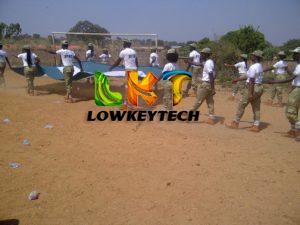 Firstly, I need to Congratulate all the prospective corps members who qualified to be among the 2015 batch A exercise, Though we have stream1 and 2 and the stream 1 are  going to their  Nysc orientation camps on the 5th of May 2015,

Below is a detailed approach on relocation process In Nysc Orientation Camp.

A friend of mine experienced this last year, when we were all busy filling our relocation forms, he was busy moving with the biggest boys in camp and he didn’t fill the relocation form, on the day we were to leave camp, our letter of relocation and redeployment was shared and he was posted to Adamawa state, he was crying #Lolz, “come and see big boy crying” Not only him though, some other guys and girls were also posted to Adamawa state based on the fact they refused to fill the relocation form while in camp. Currently he’s serving in Ogun state, i really don’t know he did it though, #Boys always have their wayz Coded level trips#
We that filled the relocation form and even attached medical report and also undergone interview, we were not given our choice state but relocated to somewhere close to the initial chosen state.

I was a prospective corps member in the stream 2 2014 Nysc batch C which took place November 26th 2014, I was deployed to Adamawa state but our orientation camp took place in Benue state. Few days after the camp registration was over, relocation forms were given to all corps members interested in relocation and redeployment, I initially went to camp with my medical report from a state hospital, though it was an authentic medical report, I was so sure of myself that I would be given any state I choose based on the fact I got an authentic medical report. To my greatest surprise I heard they would conduct interview for those who had medical issues and using medical report based for relocation. I was well prepared for the interview, the interview were conducted by medical corps members though, so after the interview I was optimistic I would be given my choice state, because I choose Ogun state based on the fact I was tired of Lagos life, I was born and breed in Lagos, I needed a change. So I choose Ogun state, on the day camp was ending our relocation letter was shared by our platoon officer. To my greatest surprised I was relocated to ‘Edo state” and not Ogun state.  I wasn’t happy with the decision, but i got no choice, Edo state is still better than Adamawa state, Also its far from home. I get to have new experiences, meet new people, learn new languages and also broaden my life and be a Man living alone and all. Am currently still serving in Ekpoma, Edo state.

So sorry for the long story above, am only sharing my personal experience with you guys. Let’s get started on the relocation process below:

The National Youth Service Corps will only consider relocation requests that meet the requirements below:

Marital Ground: Marital ground is usually only considered for female corps members who want to move to the state of residence of their husband. A corps member who wants to be relocated to another state, should after the Swearing-in Ceremony apply in his/her writing stating why he/she wants to be relocated. The application should be addressed to the Director-General through the State Coordinator. If you are applying on marital ground, you are to attach the following:

Medical Ground: You will need a medical report from our institution’s medical Centre or a recognized General Hospitals, Federal Medical Centers, Military/Police Hospital reports. And claimed to medical case history are subject to further confirmation to establish their authenticity.

Security Ground: States affected are: Borno, Adamawa, Gombe, Yobe, and other Northern states in that region. This has been a major concern in the country and the trend of Boko haram is on the high-rise, most Northern states are not safe anymore, every day we hear strange news about Boko haram, moving from one Northern states to the next.

Below is a hand written relocation requirement for marital grounds and medical ground pasted in my Camp: 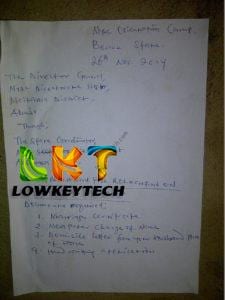 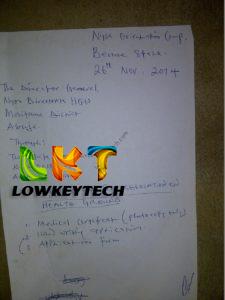 Also below is the relocation form you would be given in your various orientation camps to fill for relocation and redeployment: 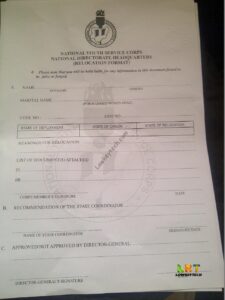 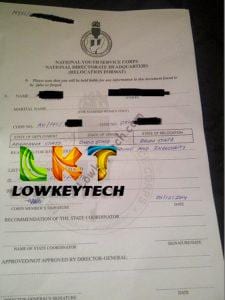 Below is my hand written application letter 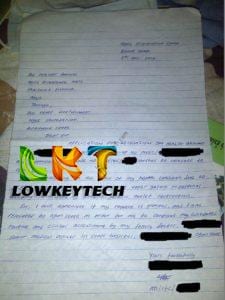 Finally, God would go with all Prospective corps members Batch A Stream I going to their Orientation camps on the 5th of May 2015, And also Batch A Stream II reporting in camp on the 2nd of June

Best of LUCK and God go with You All!!!

Wishing you guys the very best in your various orientation camps, and favor to be granted your desired state when relocating.

If you need more insight information, kindly add me on my BBM: 7A67E351.

One Month Old Nigerian Used HTC One E8 For Sale

MTN Freebies: How To Get Free MTN 150MB

One Month Old Nigerian Used HTC One E8 For Sale

MTN Freebies: How To Get Free MTN 150MB