There’s nothing uglier in Android than the stock music player. Google Play Music has seen quite a lot of iterations and variations in the past, but each time, it fails to realise that the premise it is working with fails badly. There is no way out but to switch to some other app.

But which one? This question haunts you after you’ve disabled Google Play Music. The app that replaces it is going to occupy its fair share of memory, so it better be good, right? Well, to make the decision easier for you, we’ve collected a list of 10 best music apps you can use for Android in 2017. I hope it helps.

BlackPlayer is the perfect music app for Android users who are bored by the vanilla looks of Google Play Music. The app looks edgy and it is very customisable, coming with a host of themes, accent colors, highlights and more display features. There are a whole lot of other customisation features as well, such as blurring and transitions to make your Android look futuristic while it’s playing your favorite tracks. Then, we all have those tracks we don’t want to delete but are not really fond of listening to on our morning jogs either. You can blacklist them through this BlackPlayer. Search and set preferred artist images, modify notifications and enjoy great widgets. The paid app is pretty cheap, and the free version is just as effortless and engaging. 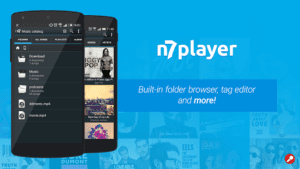 What makes n7player better than the stock Google Play Music app is that it isn’t as sparsely populated by options. The screen is neat yet has options accessible in single taps. The cool blue interface makes the dark theme a little less intense, which is a good thing. The most notable features of the app include the equaliser and its many presets that really get the sound right, well designed widgets and lockscreen access, folder browsing fit to rival ES File Explorer and album art downloading. You can even change the appearance of the app, though I personally find the black-and-blue theme the best. 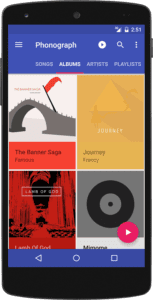 Phonograph seems to follow the visual structure Google’s stock music player uses, but it redeems itself by offering color customisation and an option to edit tags and information on your music files. The app keeps downloading album art and artist images to fill gaps in your downloads, ensuring you don’t have a generic display or one you’ve gotten used to after playing the music file a couple of times. The standard features are there as well, including a smart-looking widget, lockscreen controls and others. The app is also free. 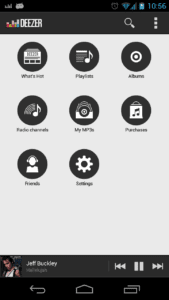 There’s a lot Deezer can do for you. To consider that it does it with such panache makes it even more deserving to be on this list. The app can be used to browse for music as well as find great recommendations. Having trouble following along with a song? You can use the lyrics playing on the screen. Maybe you can have karaoke parties with it? The app has millions of tracks you can access anytime and anywhere, with abandon. 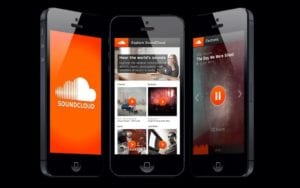 Soundcloud was among the first music streaming app that I was introduced to, and it has remained a favorite for all this time. Soundcloud is amazing because you can access your favorite music online through the website just as easily as through the app. Soundcloud is a great place to find podcasts as well, if you’re into them. The music loads quicker than videos on Vimeo, so you can feel assured the app stands tall. A lot of new and upcoming artists also put their music on the app to grow their fanbase. This is especially true for the garageband generation of artists (By the way, you can get a pretty exhaustive guide to Garageband here). You can subscribe to the Go+ service to remove ads, but they’re not really that intrusive, to be fair. The interface is different from Google Play Music, but then, so are the many extra features. Soundcloud is worth a try. 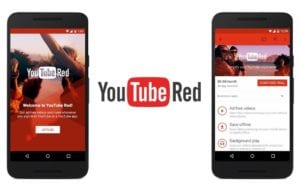 The biggest trouble people have with listening to music over YouTube is that it doesn’t run the videos in the background. You leave the app, you pause the video. That’s the deal. YouTube Red is a subscription-only service where you get access to your favorite videos even if you’re using them in the background. While playing Candy Crush. You get to make playlists, listen to concerts and live shows, catch amazing movies and web series as well as get recommendations for them. It also provides you access to Google Play Music subscription services. Two birds, one stone, don’t you think? 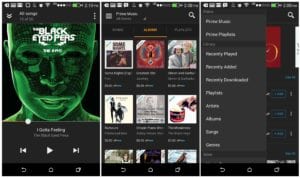 Amazon has a fledgeling streaming service for movies and TV shows called Amazon Prime. It is getting quite popular with the cord-cutter crowd. But hardly anyone knows about Amazon Music, which lets you listen to great music and also download it right to your device. It’s a similar deal as YouTube Red. You subscribe to Amazon Music and you get Prime access as well. That allows you to ship your products quickly, watch amazing content on the video streaming app and even get access to time-constrained sales before everyone else!

JetAudio has 32 equiliser presets to offer that can make your music sound so much better. This is one of the rare music player apps that offers playback speed control as a feature, which can be a boon when you’re trying to listen to a lecture through your earphones. Buying the Plus version gets you a nice smattering of extra features, which include tag editing, lyrics display, pitch shifting, a better notification bar, MIDI playback and as many as 14 widgets. If you choose to stick with the basic version, you’ll be able to do quite a lot that other music apps can’t let you. This includes scrobbling your content with the Last.fm app, finding songs on YouTube, social media sharing and touch-based control.

Media Monkey has its share of shortcomings, such as the stock-ish looks and the somewhat offputting screen widget that could do with a little size reduction. But the app has its share of amazing features as well. The app lets you choose your songs and navigate your library using tags for artists, genres and more, but in a format much superior to Google Play Music. You can set the app to sleep after a due time, edit properties and also customise how Now Playing appears. It is only too happy to sync with scribbling services like Last.fm as well. Buying the paid Pro version lets you cast the music using Chromecast, navigate files by folder and do so much more. 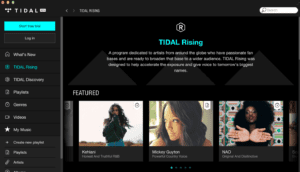 Tidal is the music streaming app of the future. It lets you play music from the internet, as well as save tracks to play later in the day when you don’t have WiFi. The app was launched by Jay Z, and it intends to provide a musical experience unadulterated by external factors, so you hear exactly what the artist wanted you to. You can listen to over 40 million tracks on the app, and watch as many as 130,000 music videos in sharp image quality that would be hard to get on YouTube at most internet speeds. The app even has music journalists working behind the scenes, curating amazing content just for you which can include recommendations, playlists and album presentations among other interesting experiences.

Which app are you most inclined to try out first?