The InnJoo Brand Becomes The Official Sponsor For RCD Espanyol

The fastest growing smartphone brand, InnJoo signs up with the leading Spanish football club to appear on the back of the Espanyol’s shirt 30 April 2017 – Dubai, UAE: InnJoo, the fastest growing smartphone brand in Middle East announced to have reached an agreement for the Spain’s leading football club, RCD Espanyol de Barcelona to become the official sponsor of the club and appear on the back of the first team’s jersey for the current season 2016/17.

InnJoo is one of the fastest growing smartphone brands across Europe, Middle East and Africa. The Dubai headquartered company was established in the year 2014 and since then it has come a long way to become a choice of millions of consumers in 30 countries including UAE, Saudi Arabia, Egypt, Nigeria, Spain, Portugal, Italy among others.

Today, InnJoo is ranked among the ‘Top Smartphone Brands’ in several of the countries that it operates in and is gradually entering several new countries spread across EMEA region. While expressing his happiness to be associated with one of the top clubs in the country, the General Manager for InnJoo in Spain, Conrado Vázquez said “We are delighted with our agreement with the club and we are confident that this partnership will put our brand in the forefront football lovers in the country and even worldwide. 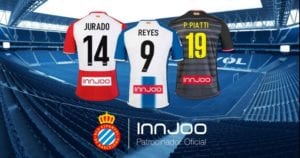 We also hope this corpora_on between RCD Espanyol de Barcelona and InnJoo will help the club achieve its objec_ves”. Popularly known as Espanyol, RCD Espanyol de Barcelona is one of the oldest and most prominent football clubs in the Spanish league, La Liga. It was founded in the year 1900 by Ángel Rodríguez Ruiz as the Sociedad Española de Football and became the first club in Spain to be formed exclusively by Spanish fans of the game. The club has come a long way over years.

Tim Chen, co-founder and CEO for InnJoo said, “I am a great fan of football game specially La Liga. And, when we decided to associate our brand, InnJoo we could easily identify ourselves with the Espanyol for its passion and spirit, as we also deliver the similar virtues with all our products. This partnership compliments both of us for the simple reason that we are both leaders in our games and always believe in winning.”

In the Derby against Barcelona on Last Saturday, Espanyol made a brutal effort. Even though they lost 0-3 to Barcelona, they came out with tremendous energy. The RCDE Stadium will have to wait another season to see a blue-white victory in a derby.