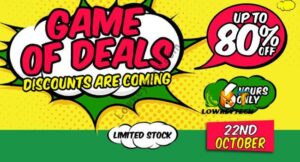 Are you bold, fast and ready to play the Game of Deals? Time has proven that our hot deals sell out in a matter of seconds and only the swift and lion-hearted would survive.

Jumia’s Game of Deals would feature colossal discounts as high as 80% across all categories for a whooping 6hours from 10am to 4pm. It seems like a quarter of a day, but will appear meager as many itchy fingers would eager to grasp a bit of the pie or the whole pie.

One vital detail about the Game of Deals is that all prices must die!  Jumia will fall, to rise again! The Game of Deals is on Thursday, 22nd of October, 2015. It is undeniably too good to be true and it would be here before you say Jumia!

Now you have an impeccable opportunity to get those shoes you have been lusting after, that sleek phone with all the right curves & edges, a gift to make your loved one happy, the PS4 or Xbox One to fulfill your gaming fantasy.

Be warned! It will be an explosive Jumia’s ‘October rush’, so get prepared and save the date because we are going to cause a tremor in the Nigerian Cyberspace in the Game of Deals.