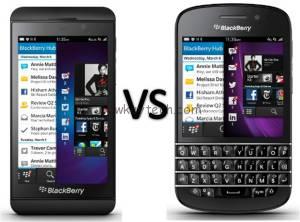 Many BlackBerry 10 fans are constantly confused when it comes to making a decision on the type of BB10 device to acquire, due to the fact that BB10 devices have almost same specs and features, with just a little upgrade and slight difference from each other. Choosing between the BlackBerry Z10 and the BlackBerry Q10 would appear to be a simple task, but taking a second look can get you confused on which to choose. The Blackberry Z10 smart phone is a touchscreen device that has a great screen view, and the perfect device for an all-touchscreen lover. The Blackberry Q10 smart phone has a physical QWERTY keyboard and also gives users the touch-oriented input option, Blackberry Q10 is a perfect device for the traditional Blackberry users that are used to the physical QWERTY keyboard. The only simple way to pick between these two awesome BB10 devices would be to check out their specs and features and pay close attention to little details.

Below are comparison of both the Blackberry Q10 and Z10 specs and features based on design, display, camera, hardware, battery, multimedia, technology, connectivity and released dates.

As you’ve seen from the above comparison specs and features, the BlackBerry Q10 and BlackBerry Z10 are almost identical when it comes to specs and features, However, I found the Q10 offered a better quality screen that also provided more impressive viewing angles. This is due to the Z10’s lesser quality IPS LCD display that only pumps out a resolution of 1280 x 768 pixels, while the Q10’s Super-AMOLED 720p screen flourishes above. Another important details was the difference in battery capacity, The Blackberry Z10 has a smaller 1800 mAh battery. While the Q10 comes with a 2100 mAh battery that’s also removable. The battery life and quality of screen is noticeably different in both the Blackberry Q10 and Z10, and the edge goes to the Q10. Though there are other slight differences to be noted.

Which Should I Buy?
After actually going through various reviews online and based on the specs and features, Also having used both the Blackberry Q10 and Z10, In the end, I came to the conclusion that the BB10 smart phone that appeals to the larger majority of BB10 fans is the Q10. The Blackberry Q10 is the most sold BB10 device in the world and also in Nigeria today. The Q10 appeals to BB10 fans that prefers both the physical QWERTY keypad and visual touchscreen function.
Finally, if you don’t want to upgrade away from the traditional style and feel of your old BlackBerry handset, go with the Q10. But, if you want a change, and get to experience the all-touchscreen feel, you give the Z10 a trial.