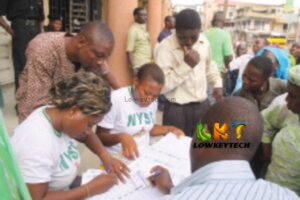 There have been lots of speculations regarding the amount of money Inec are going to pay Corps members conducting the 2015 election. Finally Inec and Nysc has issued a press statement regarding  the payment of corps members. Below is the press statement of the DG of Nysc and the Inec chairman. 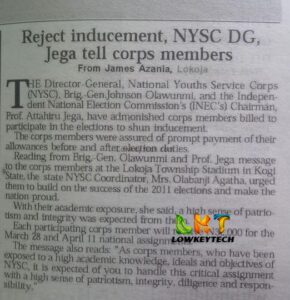 Members of the National Youth Service Corps (NYSC), known as youth corpers, will be paid N32,000 each for the March 28 and April 11 elections. This means that the corps members will be paid N16, 000 for each day of the election. The payment applies for corps members serving as Presiding Officers (PO) or Assistant Presiding Officers (APOs) in the elections

This was disclosed on Tuesday by the NYSC Director-General, Brig-Gen. J.B. Olawunmi and the Independent National Election Commission (INEC) Chairman, Prof. Attahiru Jega.

They urged the youth corpers to avoid all forms of inducement from politicians during the exercise. They were also assured of prompt payment of their allowances before and after election duties.

Reading from their message to the corpers, at the Lokoja Township Stadium in Lokoja, Kogi State, the NYSC State Coordinator, Mrs. Olabanji Agatha, called on them to build on the success of the 2011 general elections and make the nation proud.

“As corps who have been exposed to a high academic knowledge, ideals and objectives of NYSC, it is expected of you to handle this critical assignment with a high sense of patriotism, integrity, diligence and responsibility. 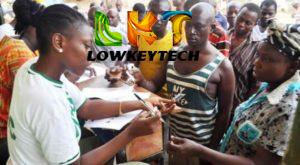 “The last general elections held in 2011 was adjudged as the fairest and most credible in the history of our country. Your past colleagues participated in that election and were hailed by Nigerians, the international community and election observers as a major contributing factor to its successful conduct. It is against this backdrop that the nation is again calling on you, the corps members, for this very important electoral national assignment”.

The unfortunate violence that followed the presidential election of 2011 has not deterred you from rendering your services to our dear nation. This indeed is a show of the zeal and unconquerable spirit of the Nigerian youth. Nigerians appreciate you, history will commemorate and celebrate you. “While praying for the success of the forthcoming general elections, we assure you that your welfare and security have been taken into consideration,” she added.

Reasons Why You Should’nt Buy That China Phone

Reasons Why You Should’nt Buy That China Phone