Important Information To All 2014 Batch B & C NYSC Corps Members

An important notice was passed from the National Youth Service Corps to all prospective corps members in Batch B and C, The memo contains important information about the Stream 1 and Stream 2. Below is a snap shot from the pages of the dailysun newspaper Monday 3rd November 2014 edition.

Read: NYSC Call Up Letter For Batch C Stream II Is Out

You can read all about the NYSC mobile app and downloads Here, The mobile app would be of great use during your Nysc

Read all about Nysc Redeployment and How to Redeploy

NOTICE: Prospective Corps Members in Batch C Stream II, And your State of  Deployment is “Adamawa State” But your Orientation Camp is In Benue State, Kindly Add Me on BBM: 265BC6F2. For Advices, Tips, Latest Info about Benue camp, General Info, and All what you need to bring to camp on the 26th, Finally How to Redeploy after camp 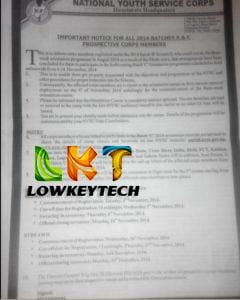 Yesterday November 4th, i saw an interesting Interview on Channels Television with The Director of Mobilisation of the National Youth Service Corps (NYSC), Mr Anthony Ani, About “NYSC Has Taken Adequate Measures To Protect Corps Members”. The interview was actually interesting and i advice all corps members to anticipate this latest development trainings in various orientation camps in the country. Read the Interview below: 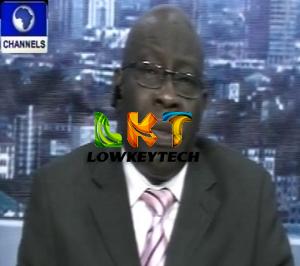 The Director of Mobilisation of the National Youth Service Corps (NYSC), Mr Anthony Ani, on Tuesday, allayed the fears of parents whose children have been deployed to various parts of the country for the compulsory service scheme.

“I assure all parents and prospective youth corps members that the NYSC has taken adequate measures to ensure that these camps are well protected and their lives are also protected.

“There are four states where we don’t have orientation going on; these are Borno, Yobe, Adamawa and Gombe, because of the security challenges that we are having in those parts of the nation”, he said on Sunrise Daily.

He, however, noted that the corps members who have been deployed to those areas are going to have their orientation at a later date outside those areas. “This is to ensure that we are in tune with what is happening,” he said, adding that security has been provided by all security agencies for all other camps across the country.

“These special orientation will run from November 26 to December 15,” he said.

Mr Ani further noted that corps members posted to those states have the choice to seek redeployment after the orientation to other locations in the country, although he maintained that “there is no cause for alarm” and that “the NYSC is very alert to it’s responsibility”.

He also said that the “NYSC will be teaching the corps members Martial Arts and have invited security experts to speak to them on security tips around all the camps”, adding that “as part of our training, by the time the corps members finish their service, instead of roaming about the streets looking for paid jobs, we will now make them entrepreneurs; so we have introduced a skill acquisition programme”.

All About NYSC Redeployment And How To Redeploy

How To Print Your NYSC Call Up Letter Without Paying 4K

All About NYSC Redeployment And How To Redeploy

How To Print Your NYSC Call Up Letter Without Paying 4K