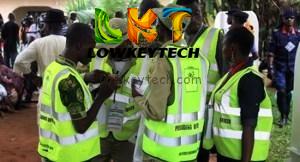 In a press release signed by the NYSC Director of Press and Public Relation, Mrs Olubunmi Aderibigbe on Tuesday, April 7, 2015  explained that corps member was entitled to a sum of N13,000.00 only which breaks down to N9,000.00, N3,000.00 and N1,000.00 for honoraria, transportation and feeding respectively.Stated as false information making round that the allowance due to corps members that participated in the 2015 General Elections was N53,500.00.

See the press statement below:

General Elections is N53,500.00. The originator of the false publication is also mobilizing them to shun the next election on 11 April unless this total sum is fully paid.

(a) Training allowance of Four Thousand Five Hundred Naira (N4,500.00) only paid directly by INEC to Corps members for the training held before elections.

(b) For each of the two elections, a Corps member is entitled to a sum of Thirteen Thousand Naira (N13,000.00) only which breaks down to N9,000.00, N3,000.00 and N1,000.00 for honoraria, transportation and feeding respectively. This implies that for the two elections, the total allowance due to each Corps member is Twenty Six Thousand Naira (N26,000.00) only. The fund for these was approved by

Elections has been paid and any Corps member who could not receive the payment latest 6pm on Tuesday 7 April should make a complaint through the necessary channels.

Also, Management has directed that the N13,000 allowance for the 11 April Gubernatorial and State Assembly Elections should be paid in advance by all NYSC State Secretariats

latest by Friday 10 April 2015. Corps members are however to note that for those who receive the advance payment for the 11 April election and thereafter opt out of participation

for whatever reason, the paid amount will be deducted from their April 2015 monthly allowance.

shortcomings to give their best in the Presidential and National Assembly Elections of 28 March 2015. You are no doubt the unsung hero of that election. However, be reminded that the job is not yet completed. You are

therefore called upon to get back immediately and prepare for next Saturday’s election. Since the conclusion of the 28 March election, Management has carried out a comprehensive review of the security challenges and is more poised to ensure the safety and security of Corps members in the upcoming election of Saturday 11 April 2015.